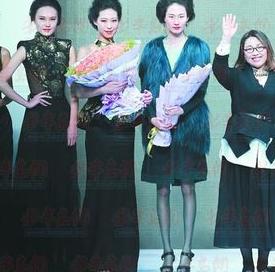 3D printed fashion can also be worn on the body, underwear can also be customized. On April 26th, the 14th China (Qingdao) International Fashion Week and Qingdao Famous Brand Product Week and the 3rd Qingdao Small and Medium Enterprise â€œSpecialty Special Newâ€ achievement exhibition were opened at the Qingdao International Convention and Exhibition Center. Senior designers from Qingdao, China, and South Korea, together with their latest fashion releases, presented a visual feast for the islandâ€™s urban residents. Chinaâ€™s first self-developed multi-functional 3D apparel printer debuted at Fashion Week and became a major highlight of the scene.

What is popular this autumn and winter? On the first show of Fashion Week, senior designers from Qingdao, China, and South Korea, together with their latest fashion releases, presented a visual feast to the islandâ€™s urban residents. China's top ten designers Zhang Yihua who founded the "Yihua Zhenghong" brand released the series "Fashion Universe" for the autumn/winter season from 2014 to 2015 as the first special event. Designers using the five elements in this season's popular camel, rose purple, rice, gray, black and gold focus on the universe as a mysterious, elegant, inclusive female image, colorful beaded stars like the beautiful.

The first South Korea â€œFashion Fashionâ€ release series brought by five South Korean designer groups, represented by Thousand-phase Combat, brings fashion shows such as women's ready-to-wear, dresses, and men's suits, or with restrained or refined luxury or Elegant and chic, the island townspeople who are passionate about Japan and South Korea's fashion apparel are the first to get a close touch with authentic Korean designs. Citizens who like Korean dramas can experience "Don Min Chung Thousand Styles" at the scene.

As one of the biggest highlights of this fashion week, two 3D printing styles printed by Qingdao Unitech's self-developed multi-functional 3D garment printer have also attracted numerous audiences. Curiosity. Whether it is an elegant and sexy underwear display or a solemn and elegant set of interpretations, it makes an eye-opener: the original printed clothing can really wear the upper body.

How did the clothes come out? In the Uniye Technology Exhibition Area in Qingdao, a white, one-meter-high multi-functional 3D clothing printer independently developed by China has attracted numerous visitors.

The reporter saw on the scene that the suit jacket on the model body was sewn from two pieces of printed â€œfabricâ€ and the skirt was sewn from fifteen printed â€œfabricâ€ fabrics. The material used was elastic fibers similar to the clothing fabrics. A little plastic feel. The entire garment uses a two-headed 3D printer, which takes 1 day to print. â€œFirst, the clothing designer provides the clothes model. Our software engineers use this 3D modeling, which is to create a three-dimensional model. After entering the software, the 3D printer receives instructions and a piece of clothing can be printed smoothly.â€ Qingdao Unitech Technology Co., Ltd. CEO Wang Hong said that if there is a good fabric partner, it is expected that the 3D printed garments can be worn by the public within three years.

On the afternoon of April 26th, ITTZO, a local high-end women's wear brand in Qingdao, brought a women's new product launch event for autumn/winter 2014. This series takes "bloom" as its theme, embodies the collision between modern aesthetics and classical aesthetics, the collision of western elements and eastern elements, and the interpretation of women's fashion and elegance. The designer Wang Yan introduced that the â€œBloomâ€ series was inspired by the blooming tulips. The 2014 Qingdao Garden Clubâ€™s images of blooming flowers also brought her many creative ideas. "Blooming" is dominated by dresses and evening wear, adding a touch of bright color to the stylish women's wardrobe.

In addition, the â€œChallenges and Opportunities - The Road to the Rising of Qingdao Garment Enterprises Against the Marketâ€ hosted by the Qingdao City Economic and Trade Commission was held in Qingdao International Convention and Exhibition Center in the afternoon. Chinese and foreign industry experts gathered to discuss the development of the Qingdao brand. The forum attracted nearly 200 corporate representatives.